In addition to our annual FailCon event in Bangalore, we also produce regular FailChat events around India. FailChat’s are generally a smaller and shorter FailCon like event s that focus on a particular common failure point in tech startups. Want to host a FailChat in your city? Email blake@india.thefailcon.com 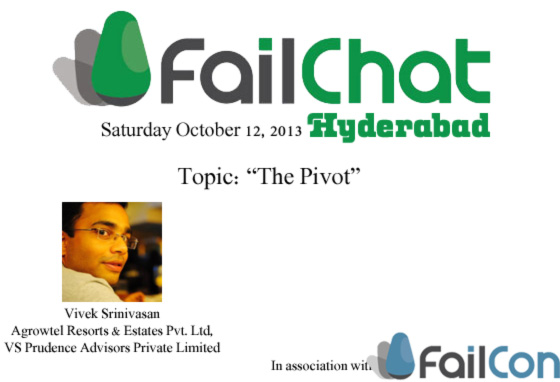 According to Lean Startup Founder Eric Reis, a pivot is a “structured course correction designed to test a new fundamental hypothesis about the product, strategy, and engine of growth.” Or put another way, a pivot is changing the entire direction of a busines driven by changes in the market and based on its current position, without detaching from it. Most successful tech startups have pivoted at one time or another. Cofinity pivoted and became Paypal. Dodgeball became Foursquare. Burbn became Instagram. And Odeo became Twitter. Indian startups are no exception. Mumbai based Webklipper became WebEngage. mKhoji became Inmobi. Even RedBus, who started with a B2B approach, pivoted to a B2C approach later and gained tremendous user traction after that. But when and how to you pivot your startup? What are the early signs? Our speaker Mr. Vivkek Srinivasan, Managing Director of VS Prudence Advisors Pvt. Ltd., will lead our discussion on the role of Pivoting in your Entrepreneurship ventures. 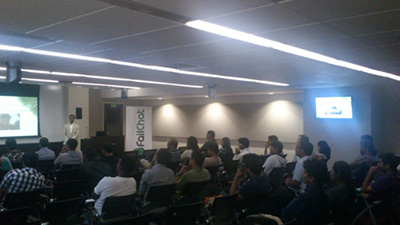 Even the simplest of companies can be bombarded with metrics: Cost-Per-User, Clickthrough Rates, Page Views, A/B Test Results, Time on Site, User Tracking, Referral Sites, and so much more. There are too many start-ups that either ignore these metrics entirely, are unsure how to interpret them, or delve into them too deeply and lose precious resources in the process. So we've compiled a panel of experts, including Shaliesh Goyal of Intuit, Vinita Annanth of GitGrow, Gaurav Sharma of Flurry, Lalit Patel of Bash Gaming, and Shantanu Deshmukh of ZipDial, to discuss which metrics are most important for a startup to measure. We'll also explore what tools to use, when to build your own, and how best to apply the data you gather successfully.